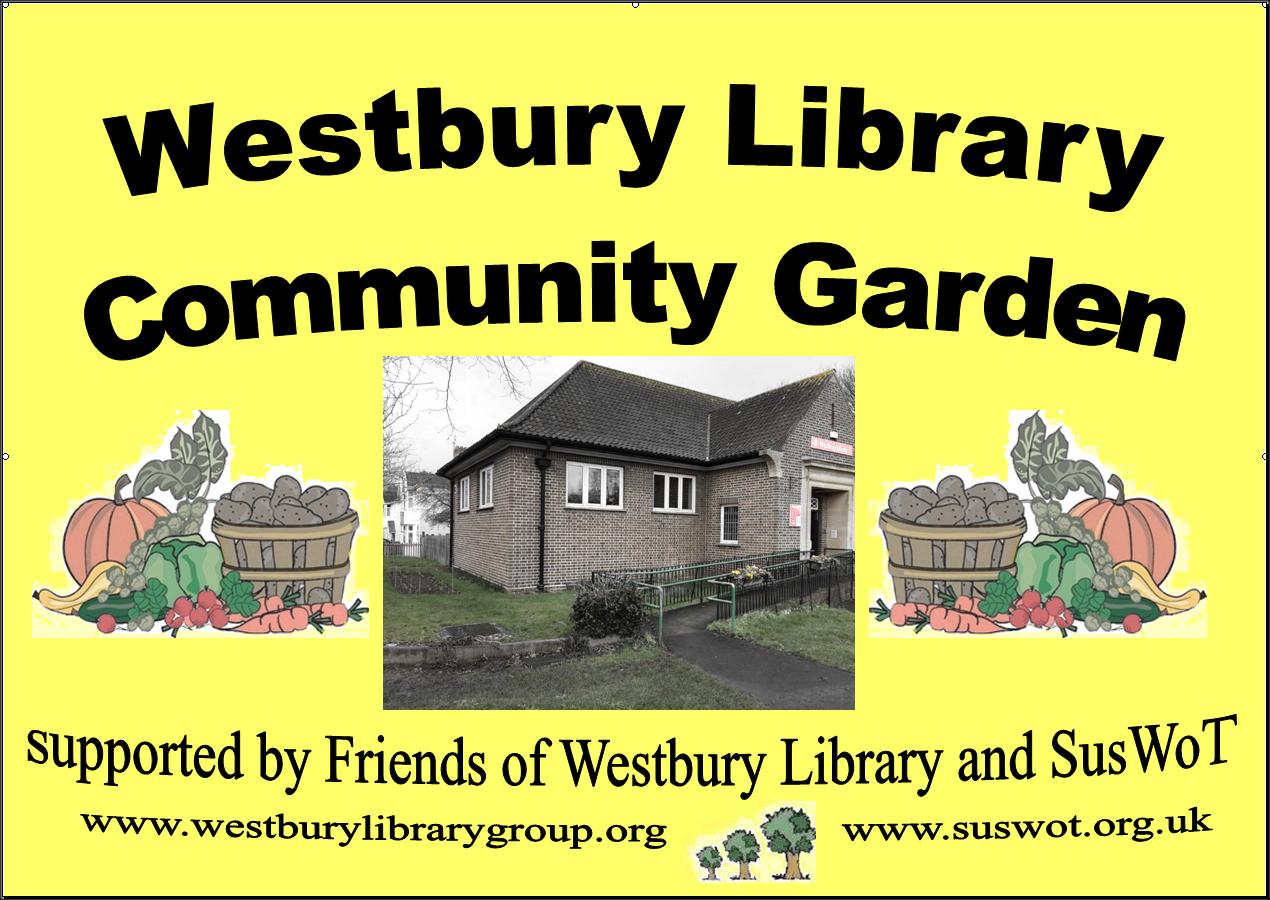 One of the ideas that came out of the discussions held back in April of 2020 was the possibility of using some of the grassy area next to Westbury Library to develop a Community Garden, providing a place to grow a variety of vegetables and other crops. With the support and expertise of members of SusWoT (Sustainable Westbury), a group of volunteers started work on developing the first plot in late November... 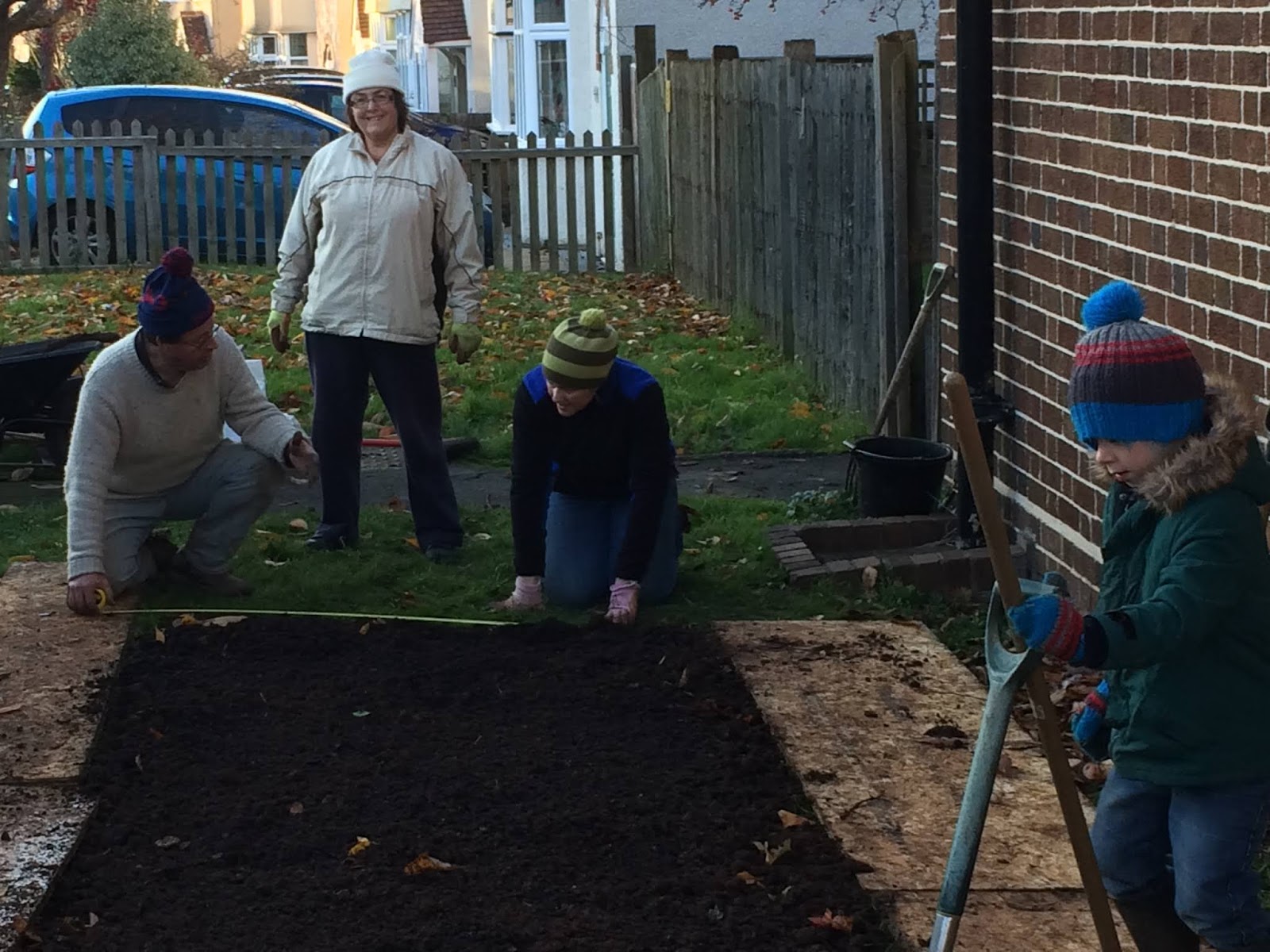 Unfortunately the Saturday was persistently wet, so work had to be postponed until the Sunday afternoon. The group were organised by Alex Dunn of SuSWoT and managed to remove the turf from the area to be cultivated and stack it up to rot down.  They were able to start forking over the ground - and then discovered that, from about 6 inches down, it consisted mostly of clay, with lots of tree roots, bricks and large stones...

They removed quite a lot of rubble and a few roots and then returned for another session the following Sunday. During this session they managed to finish clearing out roots and rubble from the bed, raked it level and sowed Broad Beans. 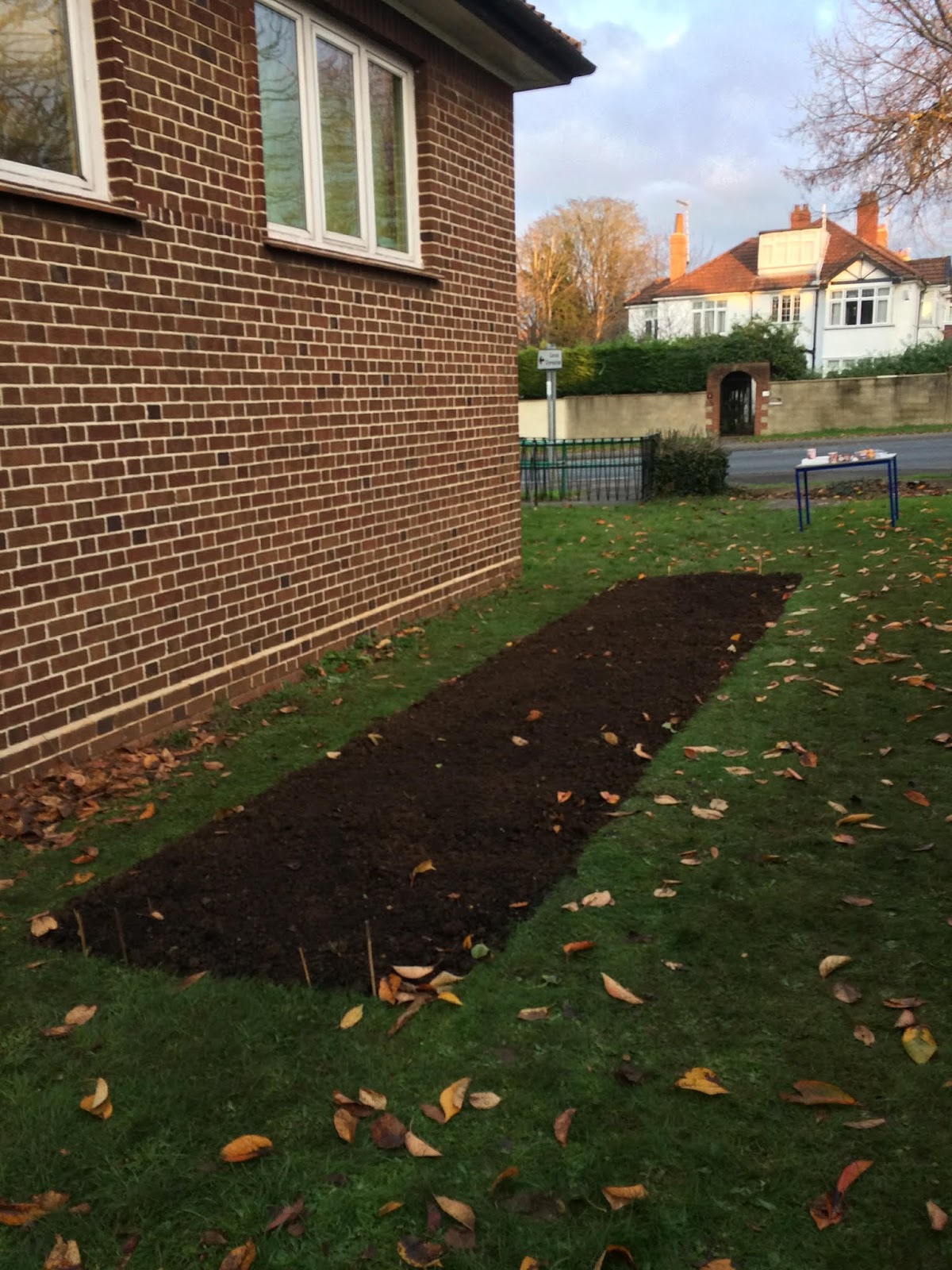 The plan was then to leave it until the beans appeared and then weed as required; when the beans were tall enough they would be staked to provide support.

Broad beans are a crop that will enrich the soil as they fix nitrogen and can be dug in. They are harvestable in June allowing the group to plant out things that have been started in greenhouses in early spring such as cabbages, tomatoes, cauliflowers, borlotti beans, runner beans, French beans etc. 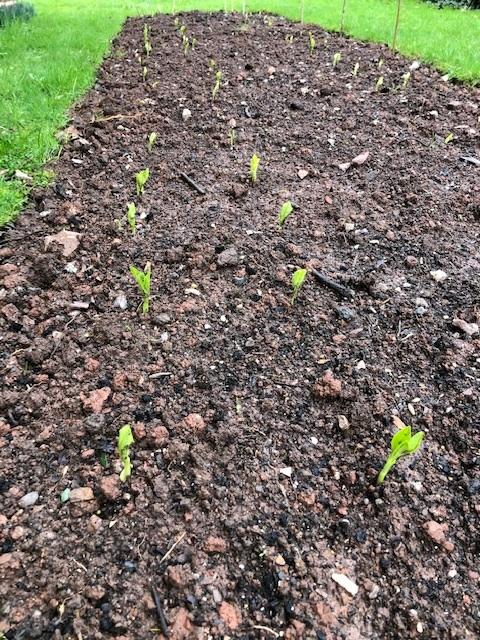 Update - January 2020
Our garden is celebrating the New Year with the appearance of a full set of bean shoots! They will soon need staking to protect them from the wind, but at least they won't need watering for a while! 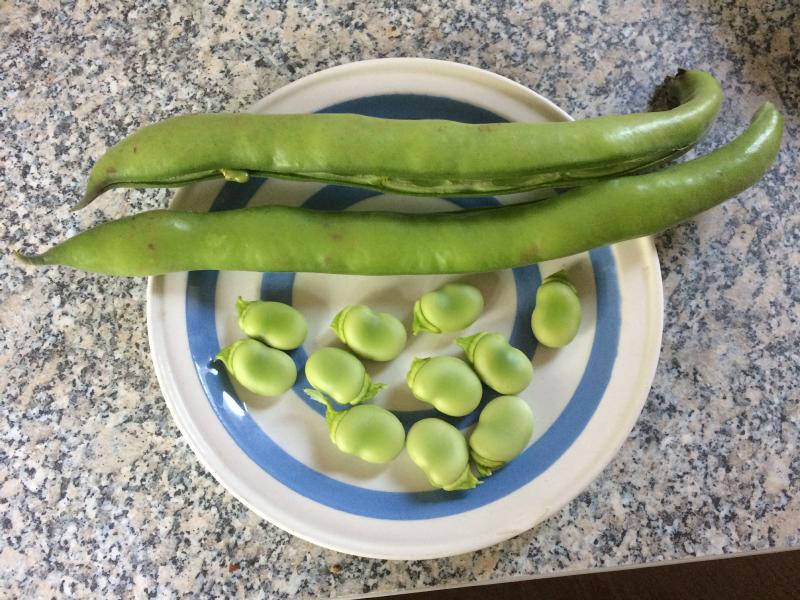 The plants flourished during the hot sunny months of "lock-down" - benefitting from some regular visits with a car-boot-full of plastic milk-bottles of water!
The end result was a substantial crop of fresh broad beans, which were rapidly harvested by various members of the Library Group and were unanimously described as "very tasty! 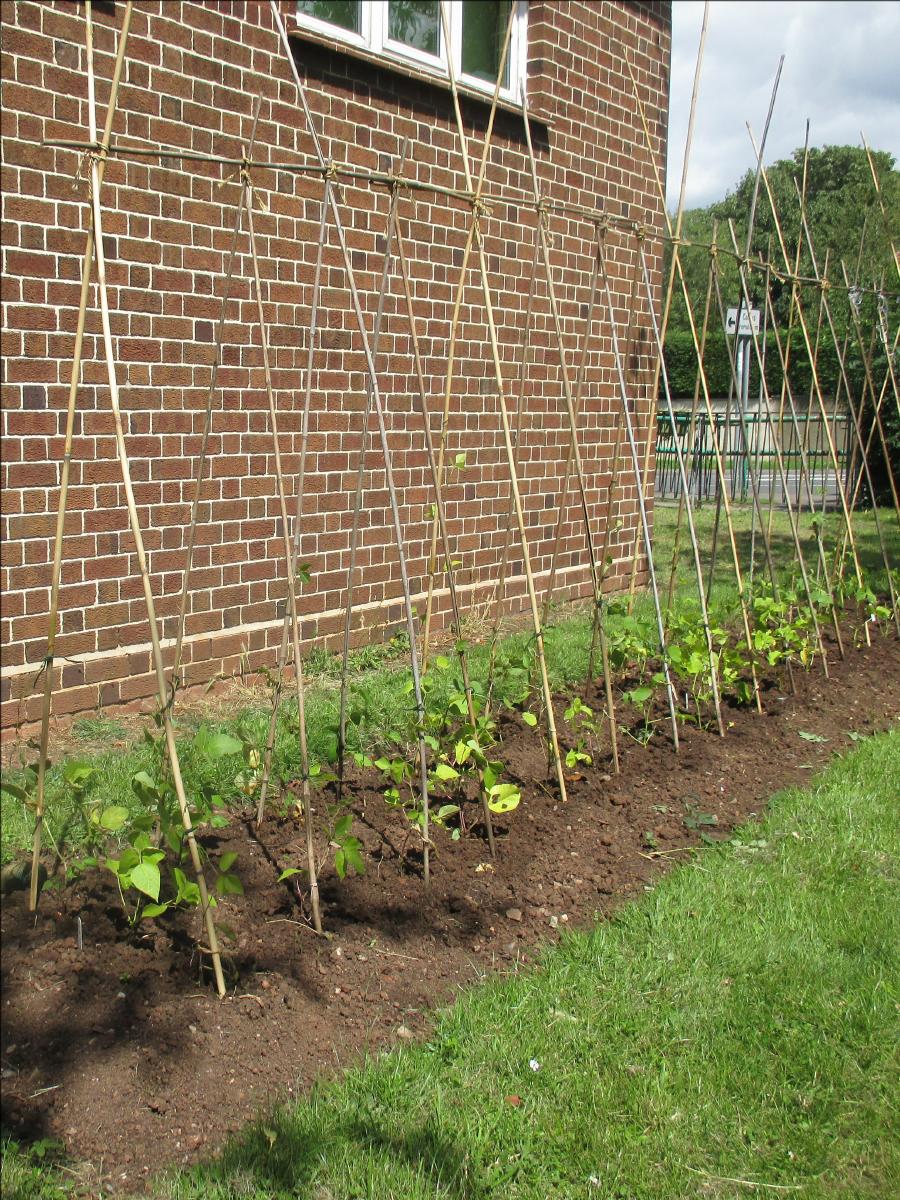 Thanks to Alex and the Gardening team, the broad bean plants were removed, the soil dug over and edges trimmed, and Westbury then had a thriving set of runner bean plants, winding their way up a very sturdy framework! As well as the traditional Scarlet Runners, there are a number of Borlotti Beans - yes I has to use Google as well, and now know they go very well in soups, salads, risotto... At that stage we were watering by using lots of plastic milk-bottles but, hoped to be able to install a water butt in the near future. 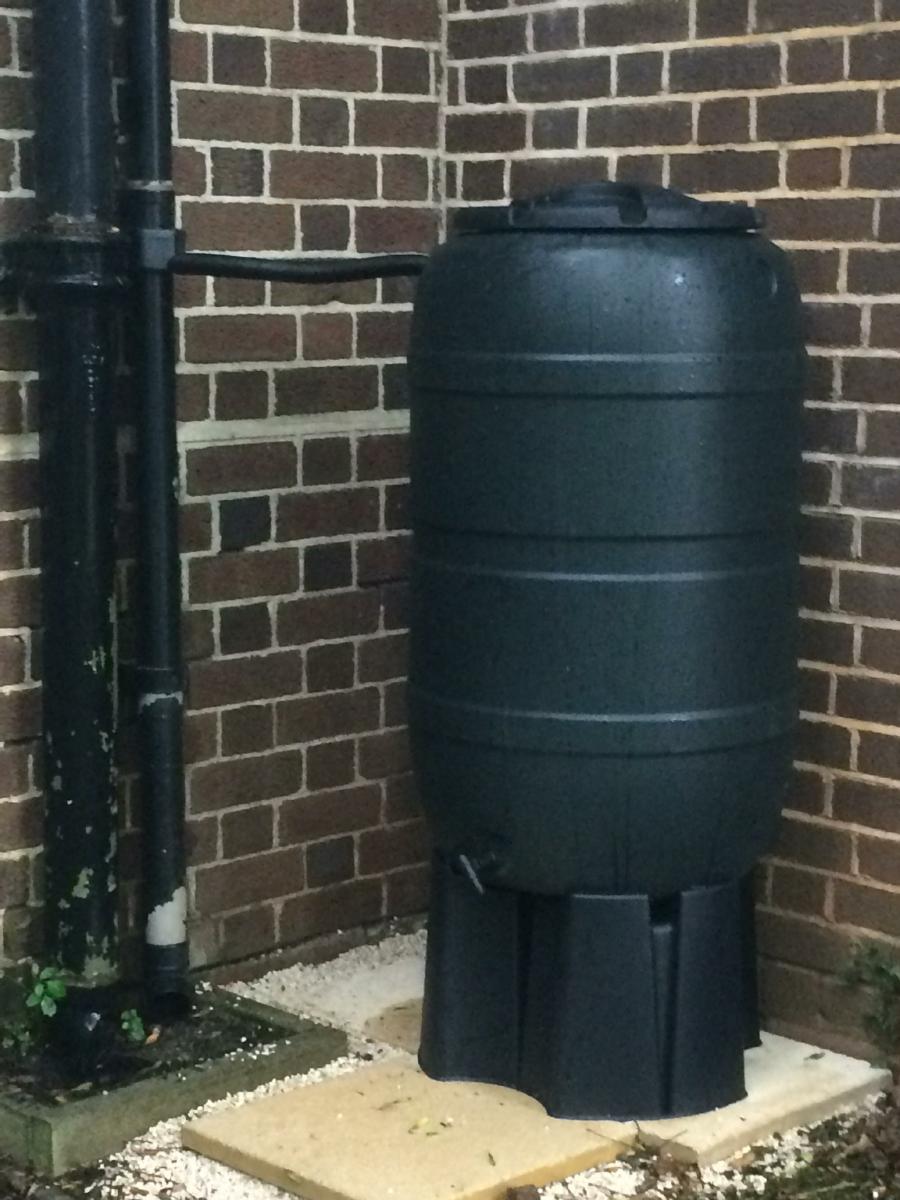 Well, we now has a water butt installed (and full to the brim!) and a banner celebrating the fact we have a Community Garden... As autumn had arrived, the next task was to dig over the soil and remove the builders rubble that is lurking just a couple of inches below the surface. Alex and Anna made a very good start, but we are always looking for some more volunteers to speed up the work...

Update - June 2021
Late November saw half the plot dug over and (hopefully) all the remaining stones removed. Once this was completed, two crops were planted to over-winter; half the plot was used for another sowing of broad beans, and the remainder was used for onions and shallots... 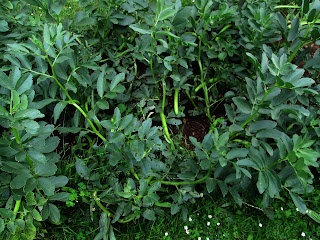 After a season which seems to have alternated between drought and flood, the beans were ready for harvesting and were described as "sweet and tender"... At this point, the onions needed a few more weeks to fully ripen... 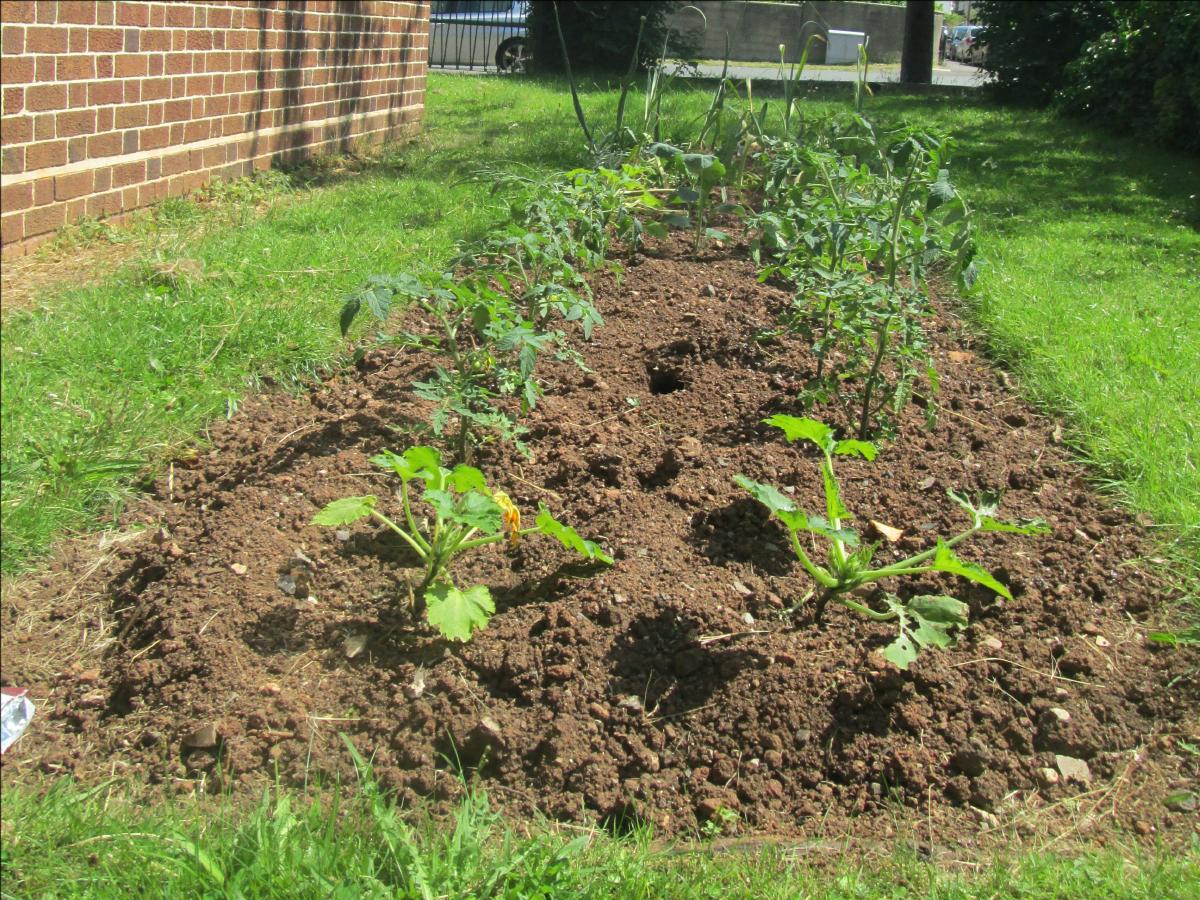 The broad beans have now been cleared and some more stones removed from the soil, followed by a summer planting of tomatoes, courgettes, cucumbers etc. All the new plants were thriving. although the high temperatures and lack of rain meant that regular watering was a must! 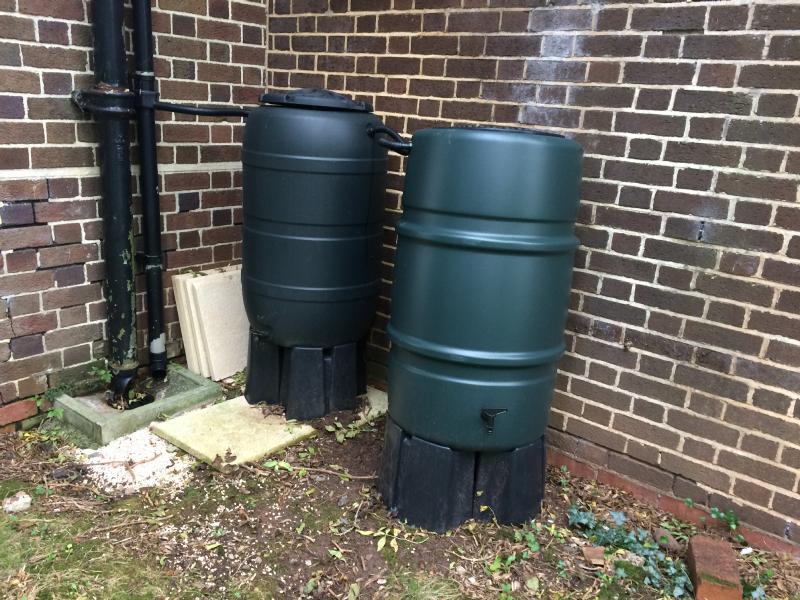 This month provided up with an unexpectedly long dry period, which emphasised the need to collect and conserve rainwater runoff. We used funds provided to the Library Group to purchase a second water butt, as well as a new banner to replace the one removed by persons unknown during the lockdown(!).
Since we installed the second water butt, it hardly seems to have stopped raining! 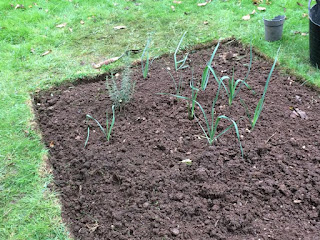 Well, the tomatoes are now finished, some leeks are planted, to be joined by onions and garlic later in the month, and the second half of the plot needs digging over and stones removing before being replanted with broad beans.
The first working party took place on Saturday, October 23rd, starting at 9:00am - these gardeners are early risers! - and more are planned for the Saturdays in November, provided the rain holds off...
If you would like to join us, just turn up at the Library - spades etc can be provided, but please wear old shoes which can cope with a bit/lot  of mud on them!

If you would like to join the group for the next phase of our garden, please email Alex Dunn at dunnja@gmail.com 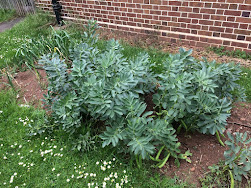 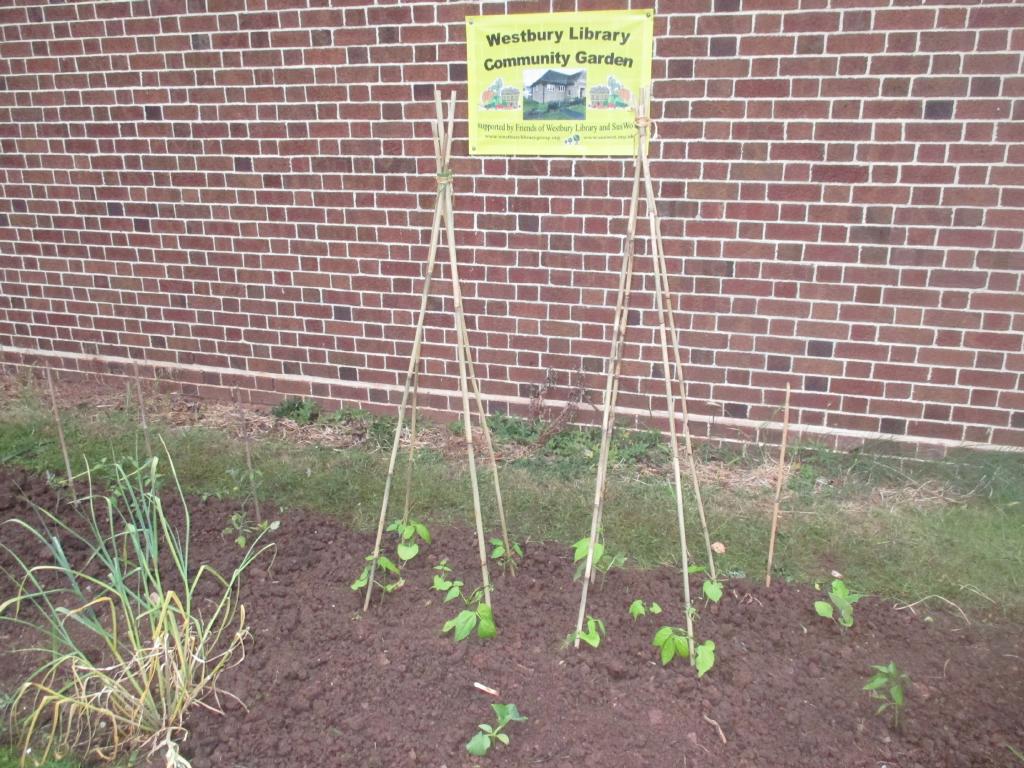 The broad beans and leeks have now been harvested, and have been replaced by runner beans and a couple of tomato plants.

The onions are being left until the leaves start to turn brown...
If you want to take one home to use, please do so, but they will not keep for more than a few days. 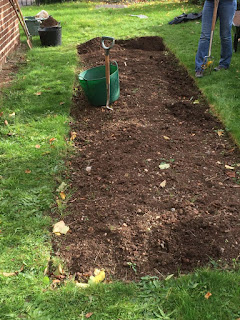 How to create a vegetable plot in several
(not so) easy stages...


Turf removed and about 10%  of the sifting complete...


"A journey of a thousand miles begins with a single step..." (Chinese proverb) 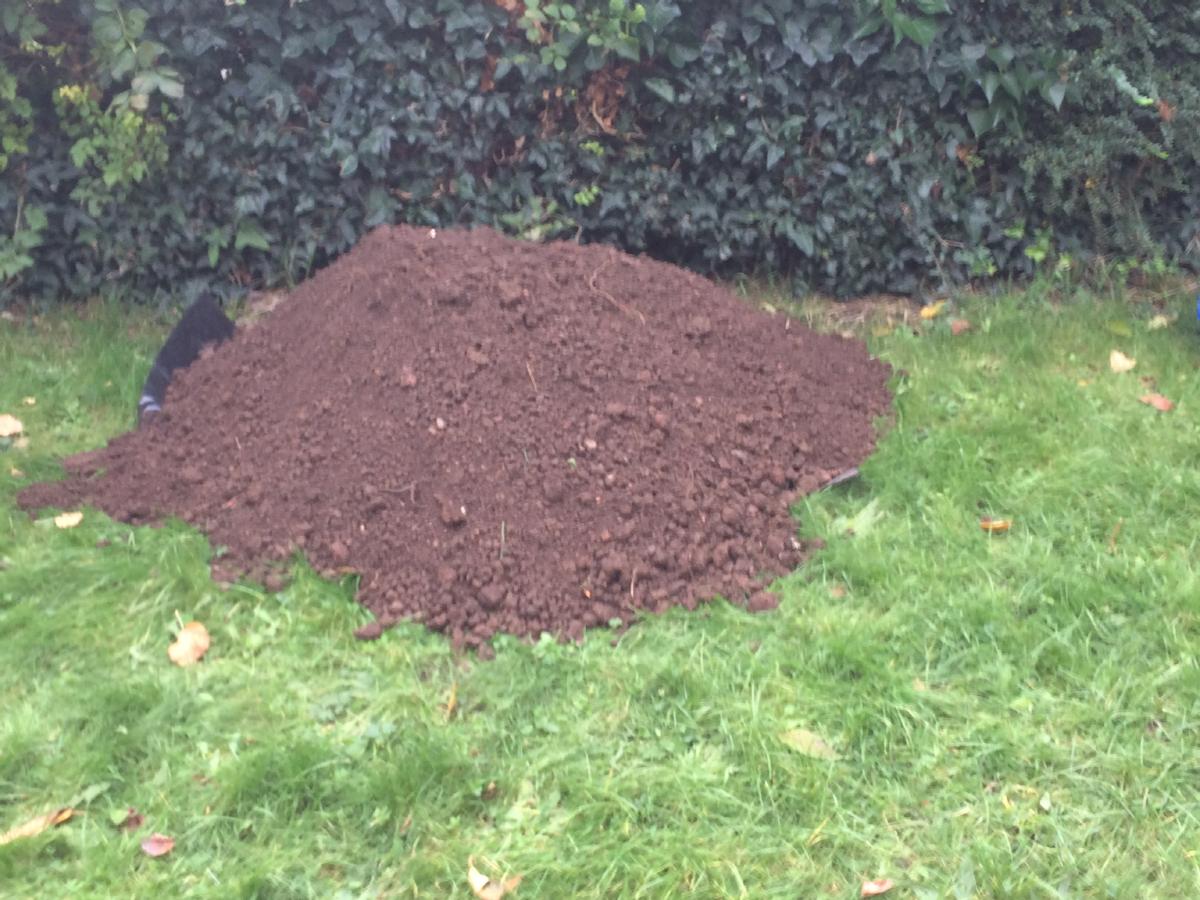 Some of the earth removed and sifted 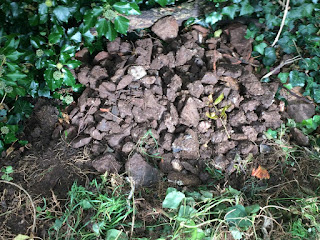 What we have removed from the soil will make an impressive rockery!